This historic reception site was founded in 1883, it would be almost a quarter of a century before First National Bank would commission William Lewis Plack, a notable Philadelphia architect, to design their second building in Havre de Grace. Deliberately designed to convey solidity, strength and security, Plack was inspired by the Renaissance-revival style made popular at the 1882-1893 Chicago World’s Fair. More specifically, the building is an adaptation of an 18th century English gatehouse or garden temple. Designers of the late 19th and early 20th centuries did not hesitate to draw from many styles; Plack and the bank building are no exception. The external façade of Port Deposit granite, each piece of stone was designed, cut and carved to fit in place, is closest to the English Revival. While the cornice, made of pressed sheet copper with Renaissance detailing and terra cotta tiled roof are Romanesque Revival.

The grandeur of the exterior is rivaled only by its interior. The square two storey banking room retains its high marble wainscot and ornamental plaster on the upper walls and ceilings and most notably its vault. Across the back, on the main floor are two offices, octagonal in shape each room has a marble fireplace and views of the Chesapeake. The upper storey or mezzanine is supported by Corinthian columns of simulated marble and wrought iron railings. This area not only overlooks the main bank room, but offers beautiful views of the Bay as well. Bronze and brass hardware, natural wood paneling, trim and doors complete the original interior detailing.

For more than fifty years First National Bank was an important part of daily life in Havre de Grace, before closing its doors in 1958. Over the next few decades the building would see several different retail applications before becoming vacant and ultimately up for sale in 2008.

Renovation and Preservation-Maintaining the historical integrity of the building was an important part of the renovation process for La Banque. While there have been some changes most of the original interior detailing remains the same. Originally the Bank President’s office and secondary bank room, the mezzanine has seen the most change. A wall and safe, constructed of brick and mortar in 1954, have been removed offering a more open floor plan with uninterrupted views of the water and main room below. Brian Thim of Rita St. Claire in Baltimore was the designer for La Banque. Great care was taken to make lighting and fixture selections that are reminiscent of the early 20th century. Rather than remove or replace we chose to restore or reuse, highlighting the magnificent craftsmanship and design that went into the building over one hundred years ago. 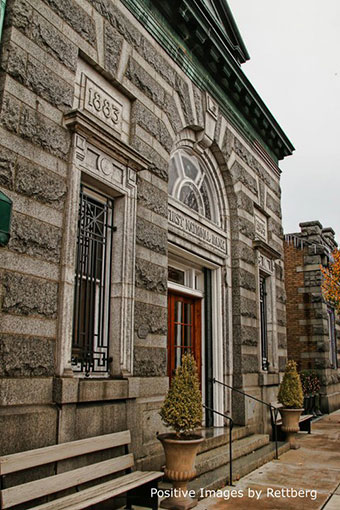 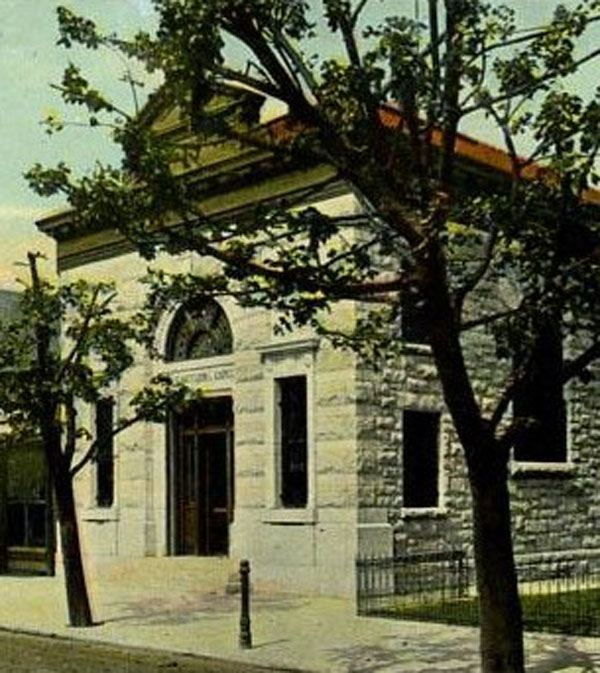